El-Kerbela'ey: We hope international delegations convey Iraq's bright side to the world 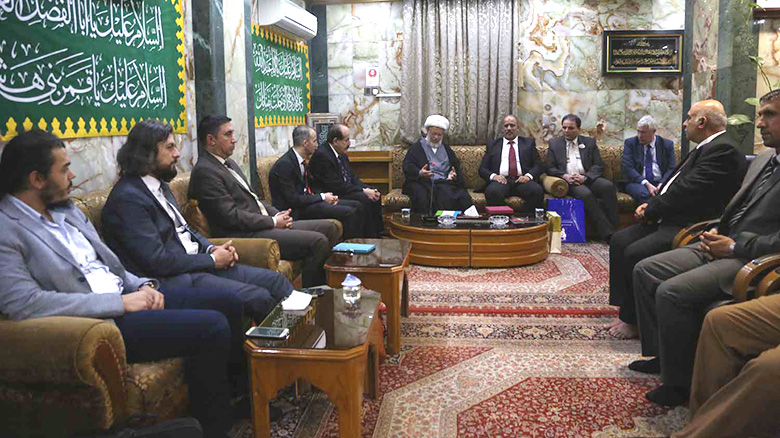 A high-profile delegation consisted of researchers and professors from En-Nehrain University and other international universities specialized in various majors visited Imam Hussein Shrine and met up with the custodian of Imam Hussein Shrine sheikh Abdul-Mehdi El-Kerbela’ey.

During the meeting, El-Kerbela’ey said, “It is important that everyone should know that we all are God’s creatures, and there is no difference between any human being and another. And it is such a pleasure to have a conference on developing scientists’ skills held in Iraq.”

His eminence added, “We hope that the delegations that come from different countries to visit Iraq will convey the bright side of Iraq to the world, which is Iraq’s reality, in order to let the world know that Iraq lives its normal life just like every other country, and not as some portrait Iraq as if it is a place where crimes and kidnappings are taking place.”

Dr. Mustafa El-Gealani from University of Huddersfield in Britain said to Imam Hussein website: “The purpose of our visit is to express our gratitude to sheikh Abdul-Mehdi El-Kerbela’ey for his support and efforts in holding the second conference on forensic evidence and information, in addition to getting to know the city of Kerbela and other cities.”

El-Gealani mentioned that the members of the delegation were from Britain, Egypt, University of Michigan U.S.A., Turkey, and Libya.