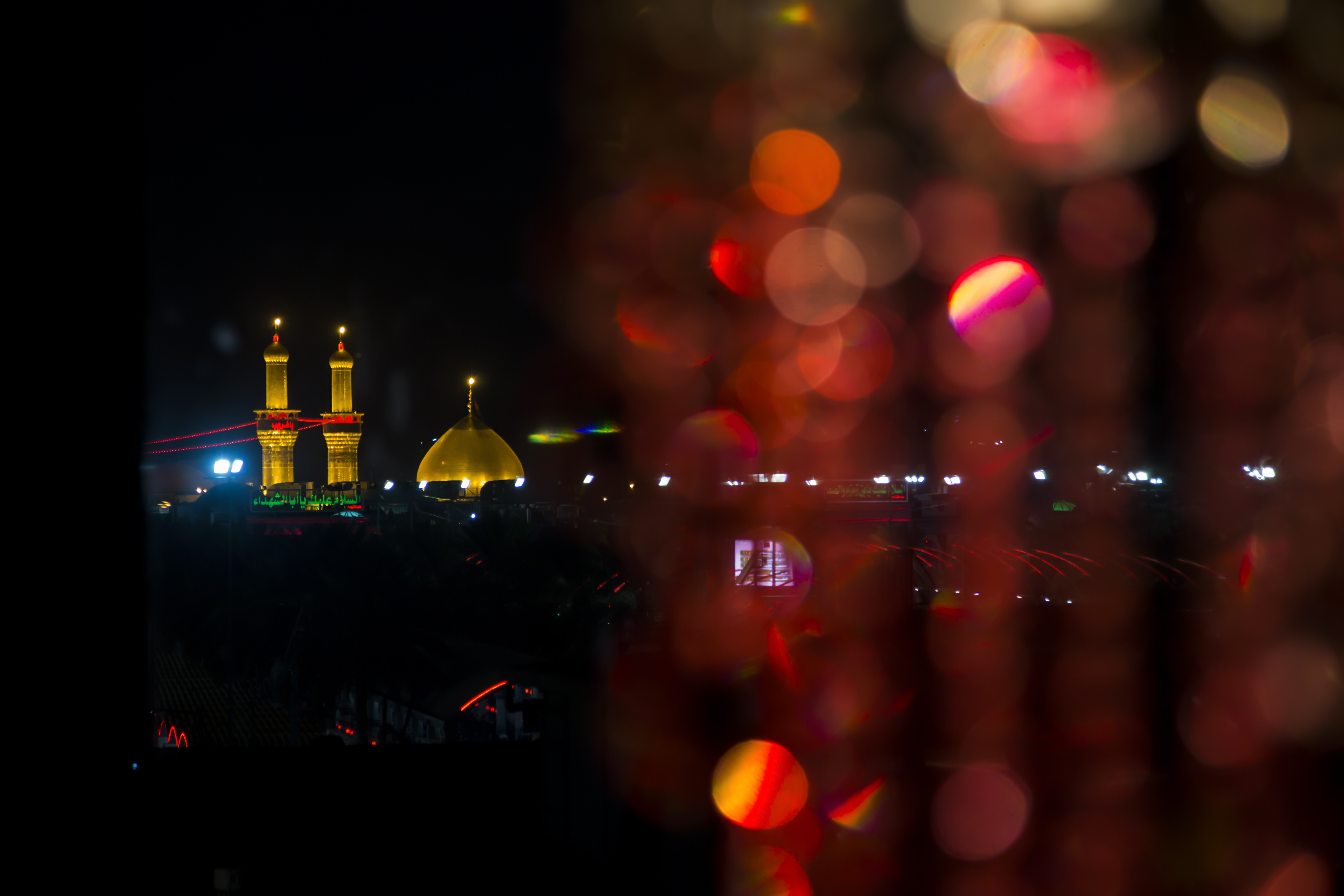 The Heat of Hussaini Love

The Holy Prophet (S.A.W.) said: Surely, there exists in the hearts of the Mu’mineen, with respect to the martyrdom of Hussain (A.S.), a heat that never subsides. Mustadrak al‑Wasail vol 10 pg. 318

Ashura ‑ A Day of Grief

Imam Redha (A.S.) said: The one for whom the day of Ashura is a day of tragedy, grief and weeping, Allah The Mighty, The Glorious, shall make the Day of Judgment, a day of joy and happiness for him. Bihar al‑Anwar, vol. 44, pg. 284.

Muharram ‑ The Month of Mourning

Imam Redha (A.S.) said: With the advent of the month of Muharram, my father Imam Kadhim (A.S.) would never be seen laughing; gloom and sadness would overcome him for (the first) ten days of the month; and when the tenth day of the month would dawn, it would be a day of tragedy, grief and weeping for him. Amaali Saduq, pg. 111

The Holy Prophet (S.A.W.) said: O’ Fatimah! Every eye shall be weeping on the Day of Judgment except the eye which has shed tears over the tragedy of Hussain (A.S.) for surely, that eye shall be laughing and shall be given the glad tidings of the bounties and comforts of Paradise. Bihar al‑Anwar, vol. 44 pg. 193.

Reward of the Martyred Companions

Imam Redha (A.S.) said (to one of his companions): If you desire that for you be the reward equivalent to that of those martyred along with Hussain (A.S.), then whenever you remember him say: ‘ Oh! Would that I had been with them! A great achievement would I have achieved’. Wasaail al‑Shia’h, vol. 14, pg. 501.

Imam Sadiq (A.S.) said: There is none who recites poetry about Hussain (A.S.) and weeps and makes others weep by means of it, except that Allah makes Paradise incumbent upon him and forgives his sins. Rijal al‑Shaikh al‑ Tusi pg. 189.

Imam Sadiq (A.S.) said: All praise is for Allah, who has placed amongst the people, those who arrive in our presence, and recite elegies about us. Wasail al‑Shiah vol. 10, pg. 469.

Poetry Recitation during the Period of Mourning

Imam Redha (A.S.) said (to De’bil, a poet sincerely devoted to the Ahlul Bayt): I desire that you recite for me poetry, for surely, these days (of the month of Muharram) are the days of grief and sorrow, which have passed over us, Ahlul Bayt. Mustadrak al‑Wasail, vol 10, pg. 386.

Imam ‘Ali (A.S.) said: Surely, Allah has chosen for us followers (Shias), who assist us and are happy at our happiness and are sad in our sadness. Ghuraral‑Hikam vol. 1, pg. 135.

Paradise ‑ The Recompense of Mourning

Imam ‘Ali Ibn al‑Hussain (A.S.) used to say: Every Mu’min, whose eyes shed tears upon the killing of Hussain Ibn ‘Ali (A.S.) and his companions, such that the tears roll down his cheeks, Allah shall accommodate him in the elevated rooms of Paradise. Yanaabe’al‑Mawaddah, pg. 419.

In Remembrance of the Children of Fatimah (A.S.)

Imam Sajjad (A.S.) said: Surely, I have never brought to mind the martyrdom of the children of Fatimah (A.S.) except that I have been choked with tears due to it. Bihar al‑Anwar vol. 46, pg. 109.

Mourning in the Houses

For those unable to go for the ziarat of Imam Hussain (A.S.) on the day of Ashura, Imam Baqir (A.S.) mentions the manner of performing A’zadari as follows: He should mourn over Hussain (A.S.), weep for him and instruct the members of the house to weep for him. He should establish the mourning ceremony in the house by exhibiting lamentations and grief over him; the people should meet one another in their homes and offer condolences and consolation to each other over the calamities which befell him. Kaamil al‑Ziyaraat pg. 175.

‘Ali (A.S.) Weeps While Grieving the Martyrs of Kerbala

Imam Baqir (A.S.) said: Amirul Mu’mineen (A.S.), along with two of his companions, happened to pass by Kerbala and as he did so, tears filled his eyes. He said (to them), “This is the resting place of their animals; and this is where their luggage shall be laid down; and it is here that their blood shall be shed. Blessed are you O’ Earth, that the blood of the beloved shall be spilled upon you.” Bihar al Anwar, vol: 98 pg. 258.

Imam Baqir (A.S.) said: He who remembers us, or in whose presence, we are remembered, and (as a result) tears flow from his eyes, even though they may be in the measure of a wing of a mosquito, Allah shall construct for him a house in paradise and make the tears a barrier between him and the fire (of hell). Al‑Ghadeer vol. 2, pg. 202.

Imam Sadiq (A.S.) said: `As for A’li Ibn al‑Hussain (A.S.), he cried over Hussain (A.S.) for twenty years (after the tragedy of Kerbala); never would any food be placed before him except that he would begin to weep. Bihar al Anwar, vol 46, pg. 108.

The Etiquette of Mourning

Imam Sadiq (A.S.) said: He in whose presence we (and our miseries) are mentioned and, as a result, his eyes pour out tears, Allah shall make his face forbidden upon the fire of hell. Bihar al Anwar vol. 44, pg. 185.

Imam Sadiq (A.S.) said to Fudhail: Do you sit together, talk and discuss amongst yourselves? Fudhail replied: Yes. The Imam then said: I approve of these sittings. So keep our `issue’ (Imamate) alive. May Allah exhibit mercy on those who revive our issue and mission! Wasail al‑Shiah , vol. 10, pg. 391.

Tears over the Oppressed State of the Shias

Imam Sadiq (A.S.) said: He whose eyes shed tears for our blood which has been shed, or for our rights which have been usurped, or for the humiliation meted out to us or to one of our Shias, Allah shall accommodate him in paradise for a long time. Amali Sheikh al Mufid, pg. 175.

Weeping of the Sky

The Holy Prophet and Weeping over the Martyrs

Imam Sadiq (A.S.) said: After the news of the martyrdom of Ja’far Ibn Abi Talib (A.S.) and Zaid Ibn Harithah reached the Holy Prophet (S.A.W.), whenever he entered his house, he would weep profusely for them and say: ” They used to converse with me and were intimate with me and (now) both of them have departed together”. Man La Yahdhuruhu al‑Faqih, vol. 1, pg. 177

Imam Sadiq (A.S.) said: The breath of one who is aggrieved upon the injustice and oppression subjected to us, is tasbeeh (glorification of Allah), and his grief for us, is i’baadat (worship of Allah) and his concealing our secrets, is jihad in the path of Allah.

The Imam (A.S.) then added: This tradition ought to be written in gold. Amaali al‑Shaikh al‑Mufid, pg. 338.

Imam Sadiq (A.S.) said: Allah has appointed to the grave of Imam Hussain (A.S.), four thousand anguished and grief‑stricken angels, who weep over him (and shall continue to do so) up to the Day of Judgment. Kamil al‑ziyaraat, pg. 119.

Imam Redha (A.S.) said (to Rayyan Ibn Shabib): O’ Son of Shabib! If you have to cry over something, then do so over Hussain Ibn ‘Ali (A.S.) for surely, he was slaughtered in the manner in which a ram is slaughtered. Bihar al Anwar, vol. 94, pg. 286.

Gatherings in Remembrance of the Imams

Imam Redha (A.S.) said: He who sits in a gathering in which our affairs (and our path and aims) are discussed and revived, his heart shall not die on the day (Day of Judgment) when hearts shall die (of fear). Bihar alAnwar vol 4 pg. 178.

Benefits of Weeping over Hussain (A.S.)

Imam Redha (A.S.) said: Those who weep should weep over the likes of Hussain (A.S.) for surely, weeping over him does away with one’s great sins. Bihar al‑Anwar vol: 94, pg. 184.

Imam Redha (A.S.) said: O’ Son of Shabib! Should you weep for Hussain (A.S.) in the measure that tears roll down your cheeks, Allah would forgive all the sins committed by you, whether they be the great sins or the small sins and whether they be meagre or immense. Amali Saduq, pg. 111.

Intimacy with the Progeny

Imam Redha (A.S.) said (to Ibn Shabib): O’ Son of Shabib! If it makes you happy (and you desire) to be with us in the elevated ranks of paradise, then be sad in our grief and happy at our happiness. Wasaail al‑Shiah, vol. 14 pg. 502.

Imam Redha (A.S.) said: One who refrains from seeking his (worldly) desires on the day of Ashura, Allah shall grant him his desires of this world and the hereafter. Wasaail al Shiah, 14, pg. 504.

Intercession on Day of Judgment

A’bdullah Ibn Sinaan says: I arrived in the presence of my master, Imam Sadiq (A.S.) on the day of Ashura and found him pale and grief‑stricken, with tears streaming from his eyes like falling pearls. Mustadrak al‑ Wasail, vol 6, pg, 279.

Neither Angels nor Prophets

The Holy Prophet (S.A.W.) said: (On the Day of Judgment, a group would be seen in the most excellent and honourable of states. They would be asked if they were of the Angels or of the Prophets. In reply they would state): “We are‑neither Angels nor Prophets but of the indigent ones from the ummah of Muhammad (S.A.W.)”. They would then be asked: “How then did you achieve this lofty and honourable status?” They would reply: “We did not perform very many good deeds nor did we pass all the days in a state of fasting or all the nights in a state of worship but yes, we used to offer our (daily) prayers (regularly) and whenever we used to hear the mention of Muhammad (S.A.W.), tears would roll down our cheeks”. Mustadrak al‑Wasail, vol 10, pg. 318.

Imam Sadiq (A.S.) said: He (Imam Hussain) sees those, who come to his shrine and he knows them by their names, their father’s names and their ranks in the eyes of Allah, The Mighty, The Glorious, better than you know your own children! Wasaail al Shiah vol 14, pg. 411.

Imam ‘Ali (A.S.) said to Ibn Abbas: (Once when he happened to pass by Kerbala), Isa (A.S.) sat down and began to weep. His disciples who were observing him, followed suit and began weeping too, but not comprehending the reason for this behaviour, they asked him: “O’ Spirit of God! What is it that makes you weep?” Isa (A.S.) said: “Do you know what land this is?” The disciples replied: “No.” He then said: “This is the land on, which the son of the Prophet Ahmad (S.A.W.) shall be killed. Bihar al Anwar vol 44 pg. 252.

Abu Baseer narrates that Imam Baqir (A.S.) said: The humans, the jinn, the birds and the wild beasts (all) mourned and wept over (the tragedy which befell) Hussain Ibn A’li (A.S.) Kaamil al‑Ziyaaraat, pg. 79.