The revivalism against injustice 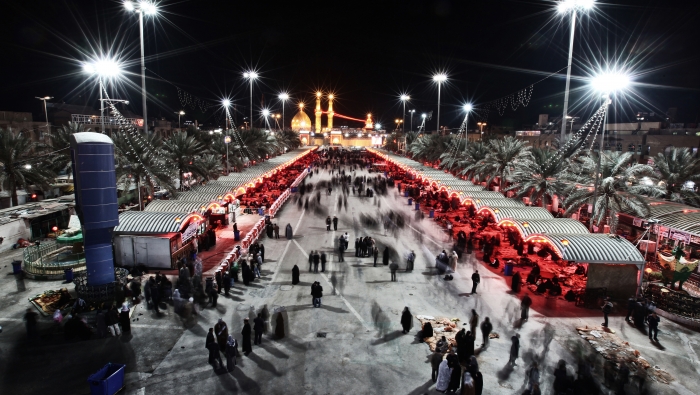 Imam and His Followers

Imam gathered his companions and addressed a short speech saying that there was nothing ahead but martyrdom. He added that since the enemy was concerned only with his person, he would free them from all obligations so that any one who wished could travel in the darkness of the night and save his life. Then, he ordered the lights to be turned off, and most of his companions who had joint him for their own advantages.

Only those whose hearts were tested by Allah remained who were about 40 companions and some from Bani Hashim (his relatives).

Once again, Imam gathered those who remained to put them on the test. He addressed his companions and relatives, repeating that enemy was only concerned with him and they could escape the danger in the darkness of night. But this time the faithful companions answered each in own way that they would not deviate from the right path and would never leave him alone.

They said that they would defend the Household of Prophet to the last drop of their blood as long as they could carry a sword.

The enemy intended to start the war in the eve of the ninth day of the month, but Imam asked for a delay till next morning to worship all over the night for the last time. During the night, some 30 soldiers of enemy joint Imam, among them was Hurr who was one of the Generals of the army of enemy. They finally chose their way to be with Imam, and Imam accepted their

repentance. In this way the number of his followers became close to 90 people consisting of 72 companions and 18 male members of his family and relatives, while enemy was more than 7,000 by then.

The 10th day of Muharram

The dawn of the 10th day of Muharram came and Hussein led his companions to pray the dawn prayer with, he said to them after finishing the prayer Allah had destined the death of me and you in this day, you should fight and be patient , he organized his small army and prepared them to the war, when he saw the huge army which is going to fight him, he went into tears , when they asked him of the reason why he shed the tears , he said I shed the tears for this army will go to hell because of me , the Imam  prepared himself for the battle but not willing to start the fighting himself , after he supplicated for Allah, he started to advise the enemy telling them to repent but they were not affected by the Imam,then , the companions of then Imam started also advising the enemy not to fight the Grandson of the Prophet and warning them of Allah's anger but they also not affected.

When Imam saw that there is no way other than defending his Grandfather's religion, and to defend his women and family after he lost all his companions and supporters, he went to the enemy holding his sword, he went on fighting and killed many of them, then, he fought both sides right and left, he killed many of them, Amr B. Sa'ad when saw that, he shouted to his army to surround the Imam from all sides, they tried to reach the family camp, Imam said to them if you people do not follow the teachings of Islam then, at least be free and behave according to the manners of your family, exclude the children and the women of your transgression , the enemy went on fighting him unaffected by this and the Imam was getting very thirsty , he went towards the river and tried to drink, one solider told the Imam do you drink the water joyfully and your family is under our control? The Imam threw the water of his hands and went to the camp to protect his family, he told his family that he is going to be leave them and this may be the last meeting between them, after he said good bye to all his family and advised them to be patient, he went to the battle arena and started fighting, he killed many others, when he reached the river bank , they gathered around him and shot him with two darts one went into his neck and the other into his mouth, he pulled them out and supplicated to Allah to avenge him upon those killers, Amr B. Sa'ad told the his army to attack the Imam as he is on the verge of death , they continued shooting him with the darts till he was heavily hurt and darts went in all parts of his body.

The Imam stayed most of the day in this state, the enemies were afraid of going near the Imam because of his Holiness magnificence, then, Shimr shouted to his army to go and kill the Imam, the Imam stayed patient in spite of the heavy wounds in all parts of his body , he sacrificed everything for the sake of Allah , as the Imam was laying on the ground and heavily wounded, al-Khawly B. Yazid al-Asbahi approached him to cut his head off but he got scared , then, Sinan B. Anas cursed him and he went by himself to do this horrible thing , he slaughtered the Imam and cut off the Holy head , some historians say that it was Shimr who cut off the Holy head of Imam .

The battle ended with the burning the tents of the family of the Imam and The children along with the women were taken as war prisoners to Obaidu'llah Son of Ziad in Kufa then, were taken to Yazid Son of Mu'awiya in Sham (Syria).True that the Imam had accepted the call of Allah and he did the Jihad to the last drop of his purified body was shed and was cut to parts for preserving the Islam and to prevent the dissentions among Muslims, his revolution was a call for the people to stick to the right.